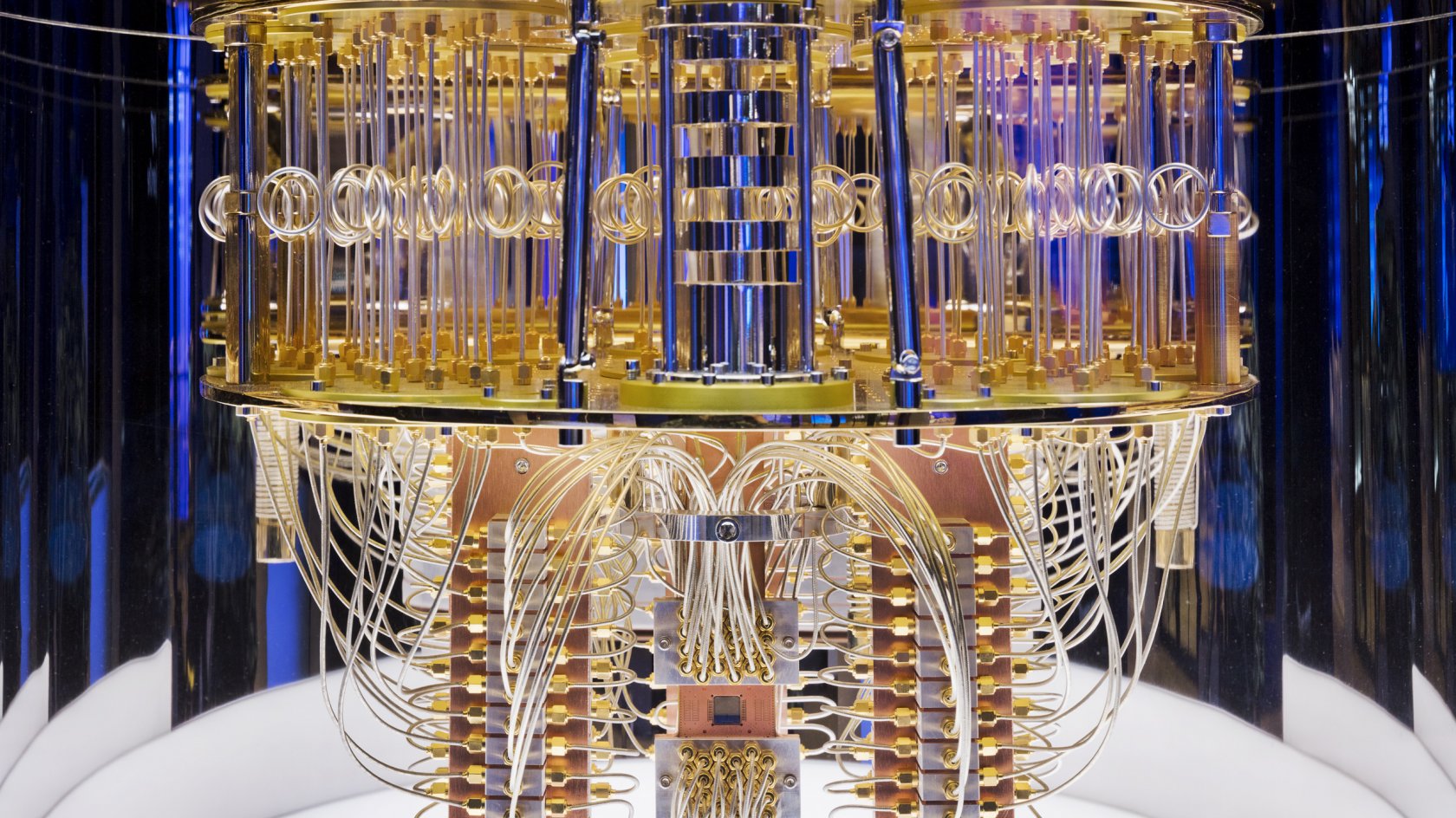 “Any sufficiently advanced technology is indistinguishable from magic.”

The late Arthur C. Clarke, scientist and science-fiction author had a visionary lens for the enticing possibilities of the future. Whilst he may not have been present for the current pioneering developments taking place every day in pursuit of the fault-tolerant high-fidelity error-corrected scalable quantum computer amongst every prospective quantum engineer’s dreams, his musings on the apparent capabilities of complex technologies very accurately reflect much of the public’s view on the latest advances in physics, engineering and computer science. This applies most particularly to the field of quantum computing. Much of the excitement surrounding the manufacture of a functional quantum computer is not readily accessible to scientifically inclined members of the public, instead being closeted within the circles of the initiated, among those chosen few scientists who seemingly discuss their work in esoteric cryptograms, recounting their efforts using mysterious acronyms for devices, hardware and mechanisms faster than one is able to decipher if one lacks formal education and training within this specialised industry. Even if one braves the pages of journals such as Science or Nature, the reader is often met with that impenetrable prose so consistently abused in the abstract of a quantum research paper, and often impossible to fathom for those outside the sphere of quantum computing academics. Thus, the inner workings of quantum computers must appear as a subject veiled in mystery, or rather in Clarke’s view “indistinguishable from magic.”

The thought of the scientific community practising incantations from dog-eared, cloth-bound antiquated tomes over dilution refrigerators, radio-frequency waveguides and interminable tangled webs of coaxial cables is a rather romantic idea, but it falls largely at odds with reality. (Well, regarding some of the dusty, primitive scientific volumes kept in the mostly outdated laboratory shelf occasionally used as references, it doesn’t hit too far off the mark.) The wonders taking place within the hardware structures of a quantum computer can wistfully be dismissed as nothing more or less than magic, but this attitude does a great disservice to the extraordinary scientists, physicists and engineers who have achieved breath-taking feats establishing the intricate architecture of quantum hardware platforms. Iconoclast and brilliant Nobel laureate Richard Feynman once discussed the character of wonder and mystery with respect to scientific knowledge in his famous Ode to a Flower. He believed, contrary to an artistic friend of his, that the excitement, mystery, and awe of the flower is amplified by one’s understanding of the physical process and fundamental mechanics in the innards of the specimen. The magic and beauty of the object is enhanced owing to the scientific comprehension behind it. In the same sentiment, the beauty of quantum computers can be appreciated far better once we learn what actually lies under the hood of it.

Architecture of a Quantum Computer

Whether you’re reading this article on your laptop or phone, the device you’re using is a classical computer. Conventional computation is bound by the predictable binary arrangement in which information is encoded as ‘bits’, denoted by a decided 0 or 1 value. Every keystroke, click and swipe allows stored information to be translated into tangible logic operations and electrical signals, with which the computer interface can respond and perform appropriately. The terrain between the user interface and the hardware is the outcome of decades of scientific enterprise, and considering that you are, for example, able to read an article such as this in the first place, demonstrates that the architecture inside conventional computers is successful in its function. For quantum computers, navigating these architectural layers is not so simple. Information is not handily collected in a string of duplicitous integers – rather, quantum computers encode their information in continuous and complicated memories known as quantum bits or ‘qubits’, requiring sophisticated control of the materials comprising their physical implementation.

Between the interface and the physical realisation of the qubits, there lies a series of architectural layers which are ostensibly combined as the quantum computing stack. To effectively conceptualise the necessary elements contained in the hardware of a functioning quantum computer, the architecture can be abstractly modelled in discrete layers: (1) the quantum data plane, where you can find the qubits, (2) the control and measurement plane, where qubits are manipulated to perform operations and measurements, (3) the control processor plane, where algorithms are implemented through a specific series of measurements and operations, and finally, (4) the host processor, which is the classical portion of the computer that can conventionally facilitate the needs of the interface to access networks and provide storage.

The quantum data plane can be simply described as the ‘core’ of the hardware. This layer is where the physical qubit technologies are housed as well as the structures required to keep them there. These qubit technologies have been the result of intense effort in experimental physics, as they represent the fundamental realisation of the physical quantum system within the quantum computer. Qubits can come in the form of superconducting circuits, quantum dots, colour centres in diamond, trapped ions and many more. Discussion of the various quantum computing hardware platforms is deserving of an article on its own, and as such, will save such an exciting review for another time.

Supplemental circuitry used to measure the qubits’ state and manipulate it to carry out operations also resides within this layer. In the case of gate-based quantum computers, this of course means a tangible exploitation of the physical qubit in order to perform a gate operation. In an analog quantum computer, operations are performed through control signals to support changing the Hamiltonian (a description of the state of the qubit) in the desired way. Gate-based systems have significant challenges in this layer, since the control engineered in the quantum data plane directly affects the connectivity and the accuracy of the performance of the desired operations modelled in the control processor plane.

The Control and Measurement Plane

The control and measurement plane is where the digital signals propagated by the control processor are translated in order to be read and carried out as analog control signals for the qubits in the quantum data plane, as described above. The control processor largely dictates what quantum operations are expected to be performed, instructing the quantum data plane accordingly. This layer is able to take whatever analog output produced from a qubit measurement and convert it into bits, which as classical data can be adequately handled by the control processor. It is vital that signals in this layer are shielded properly since they receive information directly from the quantum data plane layer – which, as it houses the qubits themselves, is isolated from the external environment by utilising a vacuum and/or extreme cooling.

Quantum control signals are in themselves limited by the constraints of the qubit technology that promulgates them. For instance, a trapped ion qubit system delivers signals through waveguides to reach the qubit itself. In a superconducting qubit system, signals are also carried to the qubits through waveguides, often of microwave or low-frequency signals, fed through an extreme cooling apparatus known as a ‘dilution refrigerator’. Dilution fridges are extremely useful machines which can aid the protection of signals travelling between the control and measurement plane and the quantum data plane. They are the archetypal golden ‘chandeliers’ invariably seen in almost all promotional material of quantum computers as they are extensively employed in many quantum computing laboratories (they also make for great photos).

In the control processor plane, the sequence of gate operations and measurements which are subsequently carried out in the control and measurement plane are characterised. The host processor is the system that supplies the desired program to implement the algorithm desired to be executed on the quantum computer. Algorithms programmed to be administered by the host processor are designed by quantum software engineers, which is a very active field of quantum computing research. It is important to note that within this plane, classical processors are utilised. Contrary to popular belief, functional quantum computers will require pieces of classical technology in order to facilitate the interface between the quantum information and the electrical signals to control the hardware, meaning that in the future, it is most likely that quantum computers will be comprised of a hybrid quantum and classical system.

In the last two decades, there has been unprecedented evolution in designing and creating the quantum computing hardware necessary to support computations deemed superior to that of classical technology. Much has been achieved in the realm of quantum hardware engineering, however in terms of the possibilities for future research, scientists have barely scratched the surface. Knowledge of what makes a quantum computer tick is crucial to exploring these possibilities. So, embarking on a survey of the architecture and the various physical implementations of hardware platforms of quantum computers, we may draw back the curtains on the Delphic mechanisms and materials within, revealing quantum computers to be ever more beautiful than one may have previously perceived. Perhaps Clarke, upon comprehending this beauty, would review his attitude to advanced technology, agreeing that quantum computing may not be “indistinguishable from magic,” but that the science behind it is truly magical.